The story I was seeking is a story of a young woman who aspired to serve others and encourages others to break stereotypes.

She is one of the most sophisticated and well-rounded women I’ve ever met.  A role model and queen, beautiful inside and outside. Not only is she a giver, volunteering every weekend; she is also a nurturing pageant mom an inspiration to many young Vietnamese girls.  Where did she draw the courage to immerse herself and make an impact in another country for two years? What was her experience like and how did it shape her into the woman she is today?

I met Paulina in 2018 for the Miss Vietnam of the Carolinas (MVC), and she was one of the pageant moms.  She won the title in 2015, and even when she wasn’t wearing a crown, she carried herself like a queen. She was so supportive of us during practices, not only when it came to polishing our performances, but also with our personal development.  Since we live a couple hours away, I called her on Messenger for the interview. It was my first time sitting down and having a conversation with her, so I was beyond excited. 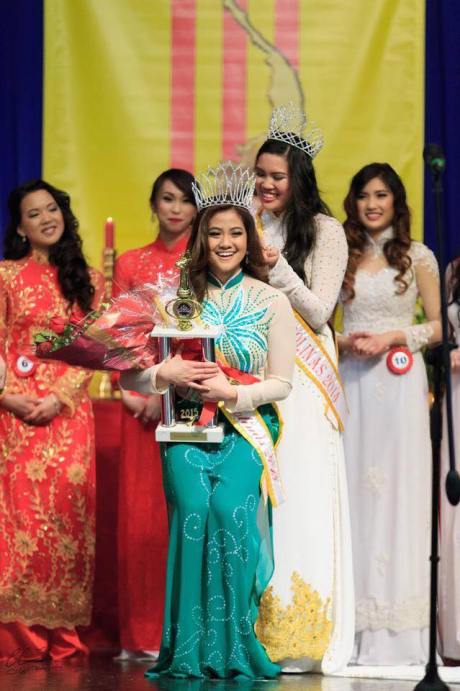 “Hi Linh,” she said in a silvery voice.

“Hello, how was your trip and the wedding you were attending?” I asked.

“It was nice.  We decided to stay a couple more days at the beach, but it was raining so we couldn’t do much, ” she answered.

Paulina grew up in New Orleans; both of her parents were refugees after the Vietnam War.  She recalled the difficulties of living in a single-parent home and having to watch her father having to work hard to support the family.  She didn’t have a mother figure in the early part of her life, and her father was always working, so there were things that were difficult for a young girl to learn without a mother.  She had her friends to rely on, though. Thankfully, her parents rekindled when she was in high school.

After starting college, Paulina realized she needed to grow and wanted to make herself stand out more.  Growing up in a Vietnamese household, communication skills and leadership skills were often overlooked by parents.  They tended to place more importance on academics, so the prospect of developing life skills was always underestimated.  She started attending more leadership workshops, volunteering on the weekends and holding workshops at the Women’s Center at her college.

Why you decided to participate in the Miss Vietnam of the Carolinas?

I joined because I wanted to break the stereotype of being a pageant girl and connect more with the Vietnamese culture.  I lived in West Virginia for a period of time, and there was a lack of diversity, and there weren’t many Vietnamese people that I could meet.  So joining MVC was my window to connect with my culture.

During my training days for MVC, Paulina was in charge of hosting a workshop day that helped fellow contestants and me connected.  The workshop was powerful because it was centered around difficult conversations such as body image, gender role, and self-esteem. I thought it was one of the most impactful things throughout my experience because it wasn’t focused on performance, but her effort empowered us to focus on our self-confidence and aspirations.

If you are going to go by what people tell you, then how are you going to ever experience it for yourself?

What motivated you to join the Peace Corps?

Joining the Peace Corps was not an overnight decision; it took five years for me to decide on it.  I went to several workshops and recruiting events; I met recruiters and researched online. I found some horrible stories, so I shied away from the idea for a little and put it on the back burner.  I decided to pick it back up again because I don’t like the feeling of regret for not knowing how it could have. If you don’t at least try, then how do you ever know? If you are going to go by what people tell you, then how are you going to ever experience it for yourself?

I felt stuck after undergrad; I went for pre-med but there was no path behind it.  I thought about my dad; he escaped Vietnam when he was twenty years old. I could not imagine being somewhere else and leave everything I know behind, so I saw the Peace Corps as a way to deal with the emotional guilt that my dad had to endure.  I wanted that same challenge, and it was my way to mentally connect with my dad.

What was your mindset when joining the Peace Corps?

I went on international mission trips, such as medical clinics every spring break.  It was good exposure but it wasn’t sustainable. I wanted to spend more time in order to make a bigger impact, and since the Peace Corps required two years of service, I was able to fully immerse myself into the community that I was serving in and making a greater impact.  It gave me the opportunity to give back while being abroad.

Many people think that volunteering abroad is very glamorous, but they don’t know that you can get homesick.

Did you experience a culture shock when it came to the change of scenery in Paraguay?

Oh my goodness, yes! It was a lot of highs and lows.  More lows than highs. We stayed in a technologically advanced location, so I was still able to talk to my parents back in the U.S.  The culture shock was that there was no work/life separation. The work followed me – everybody knew who I was and what I did since it was such a small community.

Was there pressure to keep up your image while you were there?

Somewhat, I always tried to dress modestly, I was perceived as a representation of the U.S; I had to be mindful and respectful of my environment.  You never know who’s watching you. 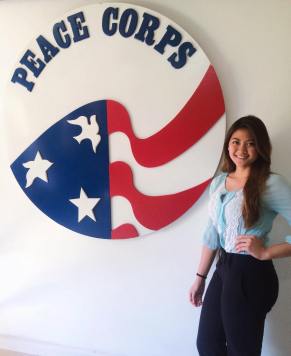 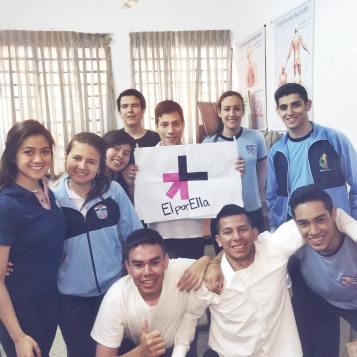 Were there any misconceptions people had about you during your time abroad?

Many people think that volunteering abroad is very glamorous, but they don’t know that you can get homesick; people are always staring at you.  The biggest thing for me was experiencing gender inequality; they were not as advanced on the path of cultural rights, and there were many cultural taboos between males and females.

I was paid $300 a month, so $150-200 a month for rent, $50 for food.  There wasn’t a lot of ingredients and I had to cook every meal. But the point of all was that you were living in the same condition as the people you were serving.  Only then can you understand and integrate into how locals live. It helps you be more mindful with your projects.

I thought about joining the Peace Corps when I was younger, but then I stopped pursuing the idea because of all the stories I heard.

Put your name in a hat because you never know.

What is your current platform?

My platform is definitely for the younger generation, both male and female, to improve their self- esteem and perception of body image.  I want to be able to open difficult discussions on stereotypes, mental health, and soul-searching. As for MVC, I want to help them break the stereotype and explore the Vietnamese culture.  Not just on the surface, but how to truly connect and identify themselves as Vietnamese. I want to be the role model that I didn’t have when I was younger. When I was younger, if I saw a Vietnamese girl in an ao dai (traditional Vietnamese dress) that represents our culture, I think she would have made an impact on my life and my connection with Vietnamese culture.

“I want to be the role model that I didn’t have when I was younger.”

Her story of wanting to become the role model that she never had was something that resonates with me.  Growing up, I didn’t have many Vietnamese role models outside of my family. I found it sad to see many of my friends having their own role models, but I was struggling to find one that was similar to me and someone I was able to relate to.

I was captivated by the story of Miss Vietnam of the Carolinas 2015, Paulina Ngọc Trần, because she was the first woman I’ve ever met who volunteered with the Peace Corps.  It was a passion that I had when I was younger, but it’s been on the back burner for a while. She was a beauty queen turned Peace Corps volunteer, and now she is pursuing her Masters of Science in Public Health.  Her eyes were glowing when she talked about MVC and her passion to make an impact on the community. She truly carried herself like a queen, and she is always aspiring to become better. I am so proud to have such an amazing representation as her for the Vietnamese community.  At the core of it all, I hope her story will inspire other Vietnamese girls or younger girls like me to break the stereotype.